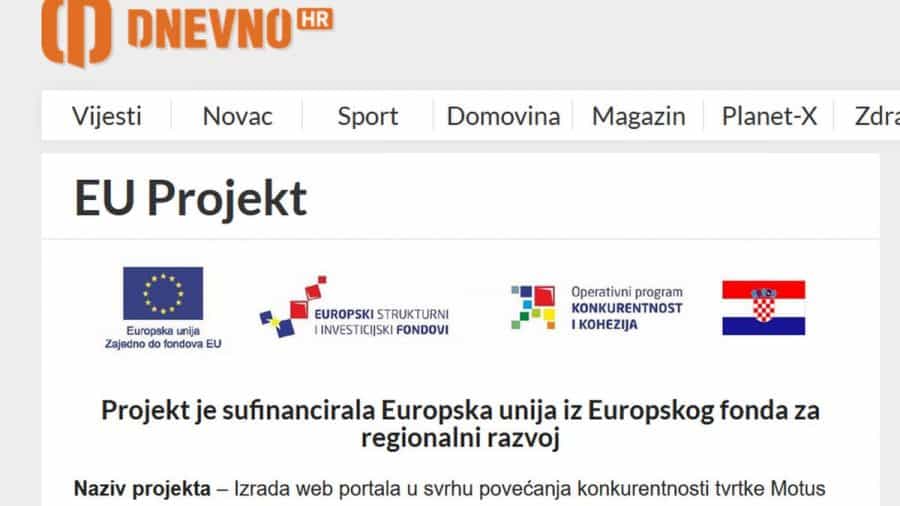 The Ministry of Economy, Entreneurship and Crafts approved a grant of 98,000 HRK [~13,200 €] from the EU funds to the Dnevno.hr internet portal, one of the leading producers of disinformation in the Croatian media space. The grant from the European Regional Development Fund was approved for the purpose of redesigning the portal, with the aim of making it easier for the readers to reach „information they are interested in”, and to help the Dnevno.hr publisher to increase their revenue.

In other words, Croatian government decided to use European funds to help the portal specialized in publishing disinformation, which also abound with hate speech, in order to make their operation even more efficient. The grant to the Dnevno.hr portal was approved within the project call „WWW vouchers for SMEs”, launched in August 2018. The grant contract with the Motus d.o.o. company, the publisher of the Dnevno.hr portal and a few other digital media, was signed in October 2018. Their application was approved during the term of the current minister of economy, Darko Horvat from HDZ [Croatian Democratic Union], who became the minister in May 2018, after his predecessor Martina Dalić had to resign because of the Agrokor affair.

They harangue against EU and are financed from European funds

The irony of the fact that European funds are used to finance a portal which regularly and frequently deludes the public becomes even bigger when one looks into the content of disinformation published by Dnevno.hr. Here are just some examples of disinformation circulating through social networks owing to the Dnevno.hr portal ahead of this year’s elections for the European Parliament: they accused the socialists’ spitzenkandidat Frans Timmermans of invoking „mass immigration of Muslim men” as a means of „achieving the goal of disappearance of mono-ethnic states”, they blamed German Chancellor Angela Merkel for trying to deprive Croatia of its sovereignty, identified the billioner George Soros as the culprit of migrations from Islamic countries to the European continent… None of these claims were correct, which also holds for numerous other cases of disinformation which Dnevno.hr has spread for years, and which Faktograf regularly debunked as false.

Just during October 2019 Faktograf debunked as many as ten different pieces of disinformation circulated by Dnevno.hr. The claims by the Dnevno.hr portal whose falseness we exposed in the last month were published in the period from January 2017 do October 2019. We dealt with older articles after they were revived through repeated distribution via social networks. The content of the disinformation by the Dnevno.hr portal which we showed as incorrect ranged from climate crisis denial, through glorification of the Russian president Vladimir Putin, to instigating intolerance towards refugees and migrants from Africa and Middle East.

The Ministry of Economy is silent, and the European Commission is helpless

We asked the Ministry of Economy whether the quality and factual correctness of the material published by the Dnevno.hr portal was taken into account when deciding on granting European money to the Motus d.o.o. company. We also requested a copy of the contract signed with the publisher of the Dnevno.hr portal, as well as the project application documents from the Motus company. We received neither the answer to the question we asked nor the copies of the documents requested, although we warned the Ministry that under the Right to Access Information Act they are bound to provide the answer.

This is why we also sent memos to the European Commission, i.e. the spokespersons competent for the issues of regional development, which also include allocation of funds from the European Regional Development Fund, which Croatian government decided to use to support the notorious producer of disinformation. We asked the European Commission if they consider such form of allocating European funds legal, i.e. whether member states are allowed to finance activities of persons who spread disinformation and instigate hatred. We also asked whether there would be any sanctions against Croatia because of the irresponsible management of the common European funds.

We were told that the European Commission can not officially comment on this particular case. Sources from the Commission just point out that “the struggle against disinformation is a common and long-term challenge all EU institutions and member states must jointly face”. Unofficially, however, we learned that the European Union is helpless in this case because the rules of distribution of moneys from European funds have not foreseen the situation we described. No one has ever thought to explicitly forbid that European funds be spent to increase efficiency of production of disinformation. Based on the principle that everything is allowed unless explicitly forbidden, it follows that the Croatian government did not break any rule by allocating funds which will enable the Dnevno.hr portal to increase its future earnings. Despite the fact that the portal in question shamelessly sells falsehoods to its readers and spreads conspiracy theories whose purpose is, among others, to destabilize the European Union. It seems that, opposite to the old proverb, it is sometimes useful to bite the hand that feeds you.

Promotion of nationalism and hatred

The Dnevno.hr portal is a part of a media network founded by the controversial entrepreneur Michael Ljubas, most famous for the case of takeover and destruction of Elektropromet, once was a respectable company in Zagreb, employing more than three hundred people and managing the property worth around a hundred million HRK, which is now facing bankruptcy. Ljubas established the Portal Dnevno d.o.o. company in 2010, long before the term “fake news” became fashionable. In the meantime, the media eco-system changed drastically, the awareness of the problem of disinformation (we avoid the term “fake news” because it lacks precision and because politicians have taken it over in their attempts to discredit the media) as a first-class civilization threat has become widespread throughout the world, but Dnevno.hr is still undisturbed in doing its business, and even gets funding from European funds.

Apart from the Croatian version of the Dnevno portal, Ljubas’s media enterprise encompassed the portals of the same name in Serbia and Bosnia-Herzegovina. All three portals are known for stirring up nationalism and publishing disinformation. The Croatian branch of the Dnevno portal frequently harangues against Serbs, while the Serbian branch simultaneously harangues against Croats, deepening the gap between peoples whose states were on the opposite sides of the bloody war in which Yugoslavia fell apart. Croatian Journalists’ Association (HND) warned in 2013 of the damage which Dnevno.hr made to the already polarized Croatian society. “The attacks and insults of this portal, and to a lesser degree the printed weekly ‘7Dnevno’, against individuals, associations, and social groups who do not share their conservative right-wing worldview take us back to the 1990s and often degrade the culture of public communication to the level of hate speech of wartime tabloids Slobodni tjednik and Imperial”, said HND.

In the meantime, the Ljubas’s company Portal Dnevno d.o.o. went bankrupt and was closed in 2019. The bankruptcy was the result of numerous court cases caused by Dnevno.hr regularly publishing false and libelous claims. The plaintiffs were not able to collect most of the indemnities approved by courts and in June 2017 Ljubas sold the rights of the Dnevno.hr portal to Marija Dekanić, the owner of the Logobox digital marketing agency and former member of Croatian People’s Party (HNS), the junior partner of HDZ in the current ruling coalition. Dekanić is the owner of the Motus d.o.o. company, the current publisher of the Dnevno.hr portal, through which the funds from the European Fund for Regional Development were acquired for the purpose of redesigning the portal.